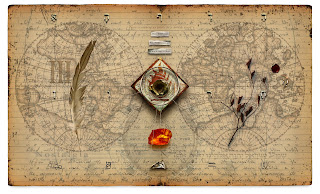 palimpsest.  1.  n.  Parchment used for  a second time after the original writing has been erased [scraped off]

I have always loved the idea of things being reused. Either reincorporated into something different and given a new meaning and context or coming to life again as something very different.

With this body of new work, in particular the digital compositions such as "An Angels Palimpsest" above (click on it) or "A Cautionary Tale", I have revisited work form a couple of years back that was as "finished" as could be at the time but with which I was not very convinced and was never published. Both of these new pieces are a substantial reworking of older images much of which was erased but with traces of some original elements surviving...in the manner of a palimpsest.

The mezzotints, "Babble-On" being the first in this series, come from new composition ideas again following the "reason or revelation" theme mentioned in previous blog posts below (June and also way back in September 2010). However today I found a proof of a large scale mezzotint that I ditched in 2010 for being poorly drawn and realised that the idea was sound enough to rework...again in the manner of a palimpsest!

palimpsest.  2.  n.  Monumental brass turned and re-engraved on the reverse side

I've been doing this on the backs of my old etching plates for decades!!...again in the manner of...yeah, yeah, we know.
Posted by Stuart Duffin at 02:35 No comments:

Putting you in the Picture 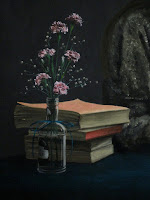 I know that some of you didn't (or couldn't) make it to the recent open studios day to see, close up, the Last Supper painting in progress, so I've included a couple of detail snapshots here which you can click on to enlarge, just to whet your appetite (hopefully without spoiling the surprise for those who plan to wait). 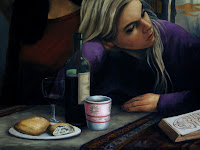 Surprisingly it is actually ahead of schedule. So, the plan is to install it (in Langside Parish Church in case you hadn't known) early in the New Year. 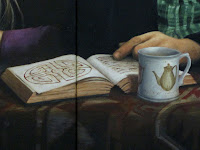 And just to get you pondering, the image you can see on the open page of the book is the labyrinth in the new Langside Church sanctuary. There's a lot more symbolism in the full painting but you'll just have to wait a few weeks for that yet.
Posted by Stuart Duffin at 14:20 No comments:

I guess what has developed in the new works ("If I had one wish..." and "Does my bomb look big in this?") is an obsession for yet more detail. Or perhaps it is more correct to observe that mezzotint has always sharpened both my awareness of the potential for, and the desire to achieve the rendering of images that I am making with a greater finesse.

As far as content goes, it is really a continuing development of the theme Reason or Revelation that I have touched on before (see the post below for September 2010 about last Octobers new work). That is why I re-organised the website with a new section under that title and grouped work from 2006 onwards in it. With hindsight it is possible to see 2006 as a time of transition, seeking , developing and incorporating images from my interest in science within the greater pool of source material that I delve in to. "Integrae Naturae" is perhaps a good example from 2006.

For those waiting for news of developments, just click on the picture of my studio above to enlarge it. I know some of you have said you don't necessarily want to see the painting in progress so I hope this view only gives you a glimpse! To date I have started half of the figures and have them in place. I still have to finish them and then consider the others alongside all of the still life elements for the table top (not to mention the table cloth itself!), the objects for hanging on the back wall...whatever they may be and also if I am going to get Leo the dog back in. Who knows? I'll keep you informed though.
Posted by Stuart Duffin at 11:44 No comments: 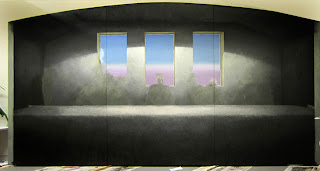 Every Friday and Saturday since early January I have been doing twelve hour shifts painting and repainting the upper room for the Last Supper (the commission for Langside Church in Glasgow, Scotland).  I feel more like a painter and decorator than an artist as it seems I have been painting the walls and the ceiling of this "upper room" for ever.

But it is coming on, slowly. Remember it is over three and a half metres long and I am incapable of using a brush larger than a quarter of an inch across.  Basically I am still blocking in shapes and areas of tone whilst attempting some colour. I always redo the backgrounds in my paintings a quite a number of times. Its just the way I work in oils, building up layers of paint, scraping them back and forming textures that look less like paint on a canvas and hopefully more like paint on an old plaster wall. Have a look at some other paintings and you'll see what I mean. Because this painting is a large one by my normal standards it takes a full days work and more just to repaint the back wall or ceiling or whatever. It also gives me the chance to get the colours and tones just right when I decide to redo it. But being so large it takes ages. Still, at least the studio is warm now after the heating broke down during January's big freeze.
But progress is being made and I am happy with what is starting to come together now in terms of atmosphere and lighting. Soon I hope to start on the fun bits, namely the figures and portraits. Keep in mind, the last one (for which this is the replacement) took me almost eighteen months to complete. So with this one there is still a long way to go.
Posted by Stuart Duffin at 13:28 No comments: