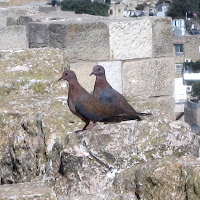 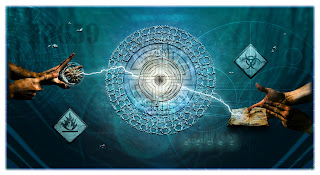 So if you are in London, UK over the summer and fancy a bit of culture then get along to the Royal Academy of Arts in Piccadilly. It will be showing from 4 June til 12 August 2012.

Posted by Stuart Duffin at 04:16 No comments:

The Infallible Law of Error 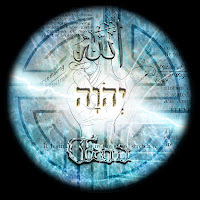 "The Infallible Law of Error"! Now where on Earth did that title come from? Well, I made it up because I liked the paradox of the "law of error" claiming to be infallible. It sums up my experience of both science and religion.

The text in the centre of the work with this title is a quote from one of quantum physics biggest brains on the planet. He said "at the heart of a very large black hole lies a tiny singularity. And a singularity is…when we don't know what to do!" Basically Einstein got it right when his theory of relativity explained the universe on an atomic, planetary and galactic scale. It also predicted the existence of black holes but got it wrong when he said that they were rarely or unlikely to exist in reality. Not only do they exist (and perhaps abundantly as it now seems that they could well be the very core of EVERY galaxy)  but within a black hole Einstein's theories just don't work. Things just get too weird. It's up to the more recent theory of quantum gravity to begin to explain what's going on in the tiny "heart of a very large black hole". Yet what we are finding is that Einstein's theory and the theory of quantum gravity profoundly contradict each other yet both exist within the paradox that is our universe. Fascinated? Confused? I am!

Einstein expressed a flash of insight though when he said (and I paraphrase here)  "Religion without science is lame, science without religion is blind" and this is what the work titled  "Lost Blue Heaven" touches on.

The other works titled "Fads and Fallacies in the name of  …Science …Faith …Reason" and also to an extent "Resistance+/-Acceptance" play with the history of our understanding and eventual harnessing of electricity. It spans from the  days when we thought electrical phenomena to be purely a Divine manifestation, through the time of The Electricians entertaining us with their wondrous tricks to the 18th century scientific experiments and contradictory theories of a Divine animal electricity (proposed by Luigi Galvani) or a universal electricity (proposed by Alessandro Volta) endowing all life. It was Volta who invented the electric battery or Voltic Pile and it was his colleague Galvani who famously made the dissected frogs legs twitch with it.

Are you still reading this? Glad to hear it. So its not just me that's fascinated by all this stuff then?

Posted by Stuart Duffin at 10:20 No comments:

The Last Supper on line 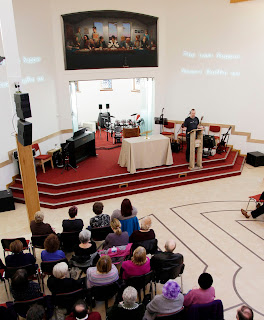 It's finally happened. The "Last Supper" oil painting launch was on Sunday 4 March and it was packed out. My thanks goes to all who have supported this in so many different ways.

But to be honest I don't know where the last year and a half has gone! But now that the Last Supper is on the wall I can catch up with a year's worth of postponed work.

I am not going to say much about the painting here. It is all on line...detailed close ups and explanations of the symbolism. Have a look at it on line.

photo Iain Mclean
Posted by Stuart Duffin at 12:56 No comments: